New Models of Professionalization in the Humanities with Giulia Hoffmann

Please join us on Thursday, May 22 from 12-1:30 for a lunchtime conversation! 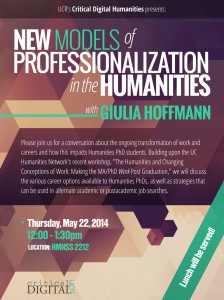 How to Do Things with Books and Screens

Join us on May 15 for a talk and workshop with Dr. Petra Dierkes Thrun on digital pedagogy in the literature classroom! 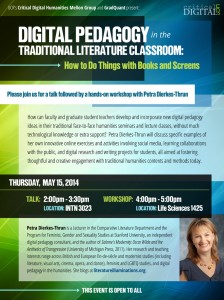 Please join us for the Year-End Colloquium for Graduate Students in “BAM.”

This will also be a celebration of the new Mellon Workshop Grant awarded to the Material Cultures of the Book Working Group – http://bookhistory.ucr.edu

Geographies of Detention: From Guantánamo to the Golden Gulag 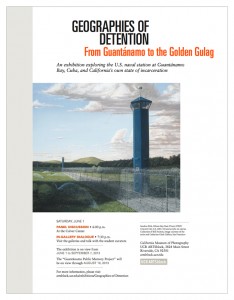 Presented on two floors of the California Museum of Photography, Geographies of Detention offers a nuanced investigation into incarceration and its architectures. One portion of the exhibition highlights work by artists Sandow Birk, Alyse Emdur, and Richard Ross, each of whom explores different aspects of imprisonment. Geographies of Detention also includes the traveling exhibit the “Guantánamo Public Memory Project,” an examination of the over 100-year history of the US naval station at Guantánamo Bay, Cuba.

The main gallery of the museum is devoted to the contemporary context and landscape of California’s own “golden gulag.” Prison populations in California have grown 500% in the last decades even as crime rates subside, and prison spending continues to outweigh state funding for public education. A selection of hauntingly evocative paintings by Sandow Birk from his series “Prisonation” (2001) reflects on the growth of California’s prison industrial complex by engaging its geographic context. Taking inspiration from pictorial genres of landscape painting, including those popularized by the Hudson River School in the 19th century, each of Birk’s paintings depicts one of California’s state prisons, from Pelican Bay in Northern California to Centinela State Prison at the US–Mexico border.

While Birk’s work shows the prisons from afar, Richard Ross and Alyse Emdur take the viewer inside these structures. In his series of photographs “Architecture of Authority” (2007), Ross explores the built environment of prisons, revealing the spatial logic used to exert power over the bodies incarcerated within. Emdur’s large-scale photographs of prison visiting rooms and collected letters and snapshots (some of which appear in her 2013 book, Prison Landscapes) offer a more intimate vision of inmates posing with their visitors against murals in fantasy landscapes of freedom. Presented together, the works of Birk, Ross, and Emdur meditate on the “carceral state” of California.

The “Guantánamo Public Memory Project” combines historical and contemporary photography, film, and first-person audio interviews to examine how the naval base has been “closed” and reopened for more than a century leading up to the attacks on September 11, 2001. These new perspectives on Guantánamo’s history as a “legal black hole” provoke discussions about the limits of democracy and the meaning of mass incarceration in a global present and future.

Collaboratively curated by eleven universities (including UCR), the “Guantánamo Public Memory Project” is comprised of a deeply researched traveling exhibit, as well as a website (www.gitmomemory.org), blog, and ongoing public conversation. The panel produced by graduate students in UCR’s Public History Program examines Guantánamo as an international symbol of America’s War on Terror and a lightning rod for debates about torture, detention, national security, and human rights.

Visit artsblock.ucr.edu for the schedule of related programs.

*The “Guantánamo Public Memory Project” will be on view as part of Geographies of Detention through August 10, 2013.

This exhibition was made possible in part by the generous support of Dean Stephen Cullenberg, UCR College of Humanities, Arts, and Social Sciences, and the UCR History Department’s Friends of Public History.

Animated Music Screening and Talk . May 30

This is the last event CDH will host for the 2012-2013 season. Please join us for this exciting presentation.

The Critical Digital Humanities presents a CDH research panel with presentations by April Durham and Kimberly Hall. They will present drafts of recent research in digital humanities for discussion and comment.

Refreshments will be served.

Production and Pedagogy: Design in the Digital Humanities Classroom

This event is sponsored by the Center for Ideas and Society through a generous grant from the Andrew W. Mellon Foundation. For more information on this and other events, please visit the website at ideasandsociaty.ucr.edu 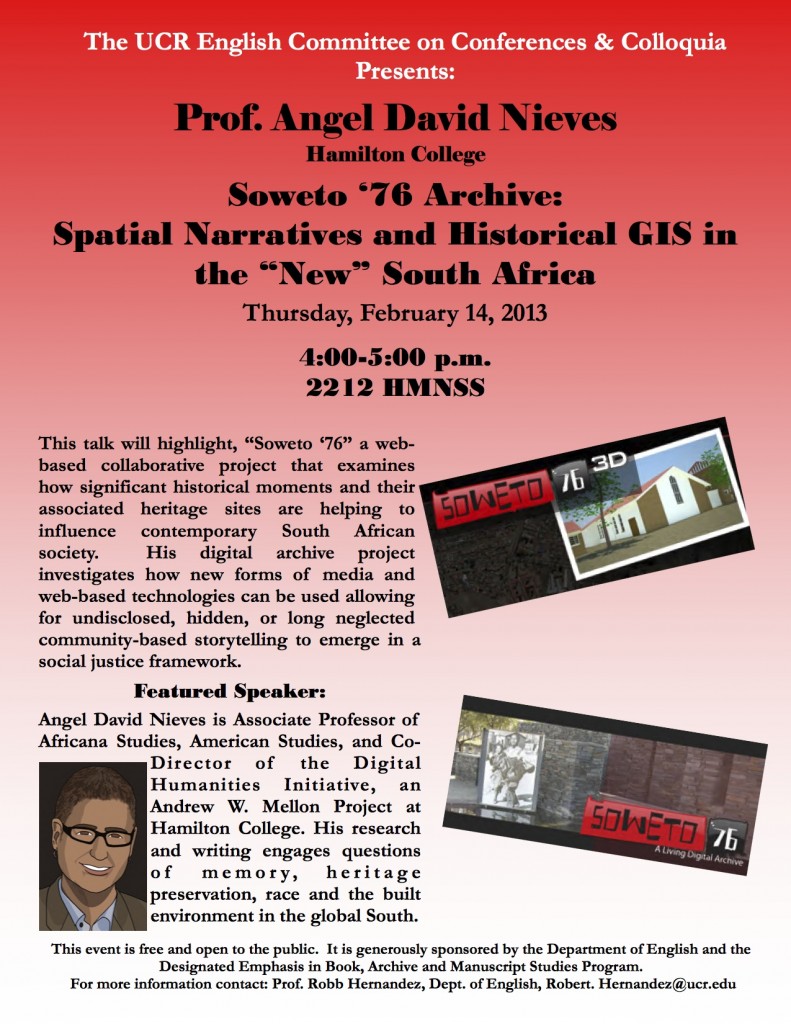 The readings include short articles from the recent collection Debates in the Digital Humanities. The three articles are available by emailing your RSVP. Please see the flier below for the addresses. Kimberly and Rochelle will lead the discussion

This reading group will lay the foundation for an ongoing discussion about this year’s theme addressing the rhetoric of digital humanities scholarship.

lunch will be served! 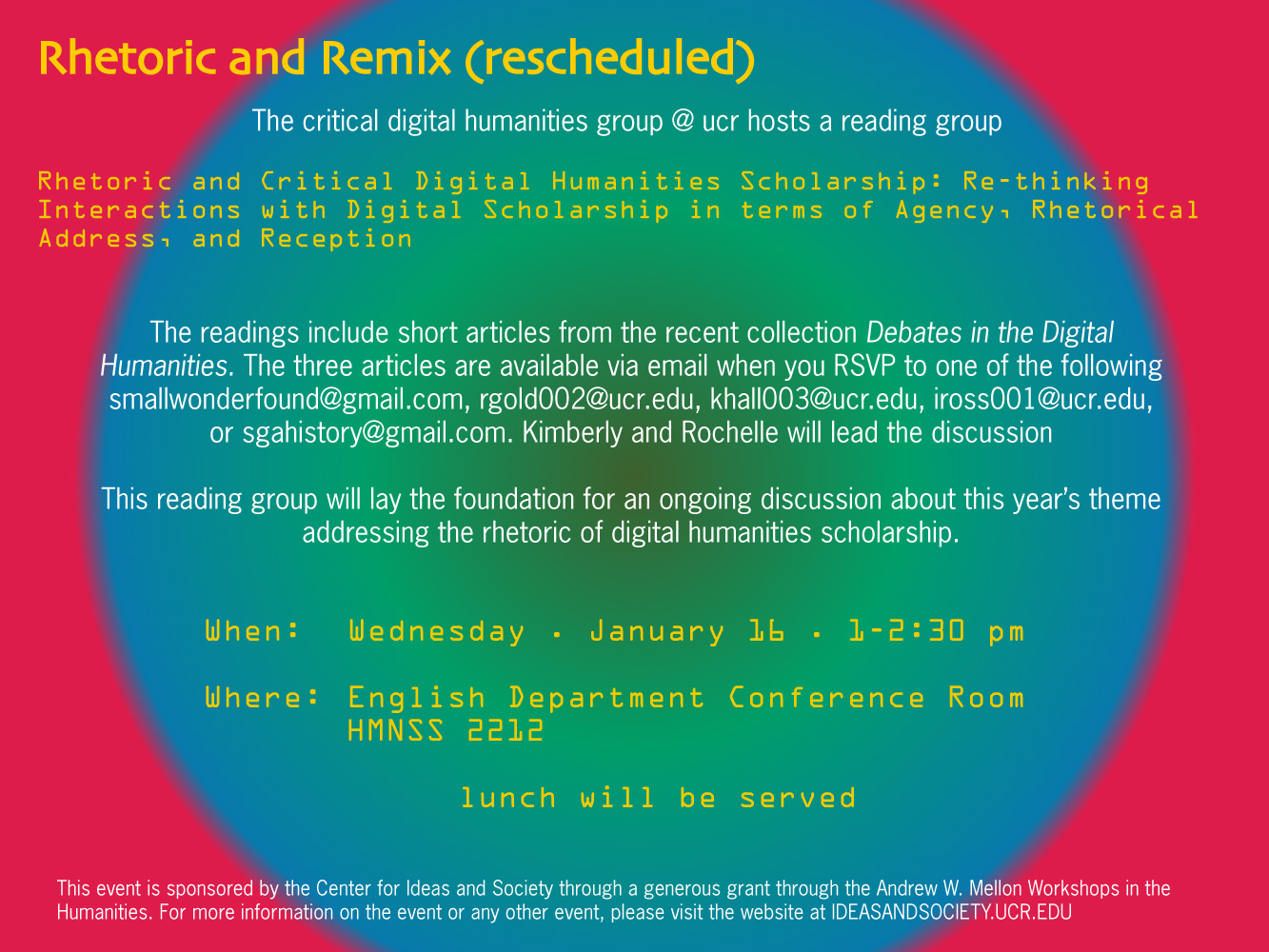 The three articles from Debates in the Digital Humanities are also available at the links below:

Lisa Sipro, “This is Why We Fight: Defining the Values of the Digital Humanities”

Stephen Ramsay and Geoffrey Rockwell, “Developing Things: Notes toward an Epistemology of Building in the Digital Humanities”

Alan Liu, “Where is the Cultural Criticism in the Digital Humanities”

This event is sponsored by the Center for Ideas and Society through a generous grant from the Andrew W. Mellon Workshops in the Humanities.

This event has been rescheduled – please see this post for details:

The readings include three short articles from the recent collection Debates in the Digital Humanities and Bernard Stiegler’s book, For a New Critique of Political Economy. Participants should obtain the Stiegler book as we will be discussing it in its entirety.

This reading group will lay the foundation for an ongoing discussion about this year’s theme addressing the rhetoric of digital humanities scholarship.

lunch will be served!

This event is sponsored by the Center for Ideas and Society through a generous grant from the Andrew W. Mellon Workshops in the Humanities.