Posts from the ‘defining the digital humanities’ Category

How to “introduce” the Digital Humanities

Ryan Cordell’s post, “DH, Interdisciplinarity, and Curricular Incursion,” has been receiving some traffic on Twitter lately among the digital humanities crowd, and for good reason. Cordell shared his experience of trying to introduce an “Intro to DH” course at a liberal arts college. The course was initially rejected, but more for language and approach than content.

What, after all, would be a DH introduction course? The term “digital humanities” is itself problematic, as I’ve written about recently. On the one hand, the amorphous qualities of DH point to inclusion, interdisciplinary collaboration, and real-world digital skills. On the other hand, however, lacking a solid foundation in a single discipline is a problem that can foster anxiety and confusion – what many DH’ers see as inclusiveness can also be seen as digital inside-baseball.

What I admire in Cordell’s post is his awareness of limits. Cordell surely appreciates the benefits of the digital humanities, but he also understands and appreciates the confusion and consternation surrounding DH. Cordell sees the need for an anchor, that DH must be rooted somewhere:

I use the term disciplinary with a strikethrough not to disavow the cross-field collaborations that underlie and energize digital humanities work, but to highlight the idea that interdisciplinary work, by definition, requires collaborators from distinct disciplines.

I plan on including that last phrase, “requires collaborators from distinct disciplines” in my definition of the digital humanities from this point forward.

Ethan Turpin’s newest solo exhibition, Stereocollision will be on display at the California Museum of Photography from January 14, 2012 – April 14, 2012. I attended the opening reception on February 18th and was struck by how the exhibit was asking viewers to think critically about how we see and engage with images.

Turpin worked with the museum’s Keystone-Mast collection of historic stereoscopic images (late 19th and early 20th c. precursors to the 3-D image) and digitally reworked them to reflect very 21st century concerns about globalization, environmental damage, and the consequences of industrialization. In one image he combined a historical birds-eye view of Manhattan and inserted an isolated mountaintop castle into the cityscape. While some of the images made it easy to see the manipulation of the photos, others, such as the cityscape photo, were disconcerting in their believability and this believability forces the viewer to question how images, particularly images presented as “historic,” are read.

Turpin is very overtly playing with the “truth value” that we invest in photographs. He writes, “We are at a time in history when the photograph is easily manipulated while retaining its authority and false promise of truth.  Given that our culture is increasingly visual in its languages, there is a wealth of ways to reflect one’s society by engaging its images.” Most of the images must be viewed through special glasses held to the eyes in order to combine the two images into a single perspective and this duality of reading can prove frustrating because you often have to position yourself at exactly the right height and distance from the photograph in order to create the full 3-D effect. This maneuvering requires work on the part of the viewer and asks you to think about what you are possibly not seeing when you look at the images. You first encounter them side-by-side on a stereo card and you have an idea about the image, but you can’t fully understand it until you see it through the provided glasses. In this way, the images refuse any easy “reading” by requiring the viewer to participate in the process of creation. This reflexive process makes you aware of what you allow yourself to “see” when you look at a photograph.

The exhibit also brings issues of technology to the forefront in both the artistic process and the experience of viewing the stereocards. While the images are very obviously presented as historical, they are also very knowingly brought into conversation with the current 3-D film phenomenon. The exhibit brings to mind the adage, “No media is new media,” and plays very knowingly with our visual vocabulary that has been informed by the recent resurgence of 3-D films. Turpin has anticipated this familiarity and subverts it through his use of the “historical.” By layering historical images, the shock is not the creation of three-dimensional depth, but in thinking through what depth actually means. In one image Turpin layers the surface image of an Arctic crevasse over an image of an industrial steel structure, making it appear as if the steel I-beams were holding up the vast expanses of ice and snow. This image seems to comment directly on the environmental concerns present throughout the exhibit, but it also seems to me to speak to our conception of technology; what we often perceive as natural or untouched is very often undergirded by a deliberate and manipulated structure that determines how and what we see. When dealing with images, we must be concerned with what we perceive to be the surface because there is often a world beneath the surface that, although invisible, has as much to do with our act of seeing as does the visible. 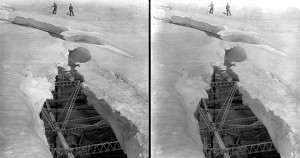 The exhibit is wonderful on its own, but it also creates a really interesting dialogue with the CMP’s other current exhibit dealing with more contemporary images: RENDER. You still have almost two months to view the exhibit and no matter your historical interests, the exhibit speaks powerfully to the concerns of all scholars of digital humanities.

Stanley Fish is at it again: “Mind Your P’s and B’s”

In his latest blog post at the New York Times (he’s only recently admitted it’s a blog, by the way), Stanley Fish is attempting to cause a ruckus in the Digital Humanities community. It’s working, the ruckus that is, not his argument.

Once again he uses Milton to skewer the DH’ers into submission, in this case to shed light on the blasphemous ways of the quantitative.

Fish states that the usual way of performing work in the humanities is to begin with a question that is informed by research. Good.

Fish is arguing here against a purely computational process that relies blindly on quantitative analysis, and that’s okay. His argument isn’t so much about the digital humanities then, more so it concerns privileging quantitative analysis over a deep and personal qualitative reading. There is no real argument here.

The problem, one that DH’ers and Stanley Fish share alike, is solidly defining the Digital Humanities. There is no actual face to the Digital Humanities in general–there are too many aspects of the research being done, the tools being used in the classroom, and the social networking going on between faculty and students of widely dispersed disciplines and universities to give one easy definition. The fluidity, the amorphousness of the Digital Humanities appears to be the real burr under Fish’s saddle.

Fish’s latest article: “Mind Your P’s and B’s: The Digital Humanities and Interpretation”