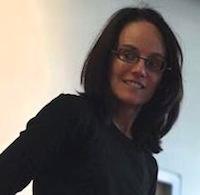 The final invited talk of the 2011-2012 Critical Digital season was presented by Dr. Rita Raley from theEnglish department at UC Santa Barbara. Dr. Raley presented a paper that addressed the way that mobile media and projected display are combining to activate public spaces and social exchange.

Considering various art practices that involve viewers as random collaborators, Raley discussed several projects where common media usage, like texting and Tweeting, are made part of a more clearly public dialog. Concerned with the way media devices generate poetic exchange and are then deployed as engagements as in “being in common.” Addressing the specificities of movement and place as material concerns for the poetics of mobile media, Raley points to work that leverages the mobility of the passing viewer and the resistant practices of graffiti art to inhabit a spontaneous and unsanctioned “commons” as a place for conversation. For example in an ongoing project by Paul Notzold, text messages are projected on buildings like apartment blocks, cathedrals, and art museums. Formatted as cartoon thought or speech bubbles, the images seem to indicate that someone inside the building or the building itself is speaking. 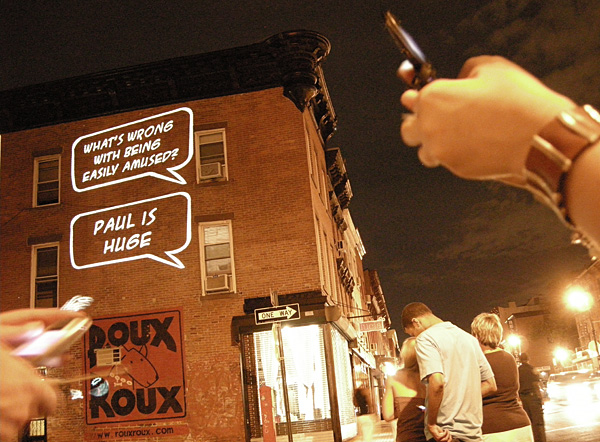 While Notzold has installed various iterations of this project at art festivals around Europe, Raley indicated one work in particular where passers by were able to send the messages to a central network that would filter them and then project them shortly after the viewer passed, allowing foot or automobile traffic circulation to determine the audience. “In this context,” Raley argues, “the cell phone becomes a device to explore public space, rather than a device to remove oneself from it, or a means of enveloping oneself in what Michael Bull has called mobile media bubbles.” The activity of migrating the private to the public, or making public space “clickable,” engage questions of relationality and community where “closed-circuit networks of mobile communication technologies” are broken as the audience contributes to the artwork and to a larger public conversation.

Because the work occurs in a long tradition of tagging or territorial marking long used by graffiti artists, especially before this practice became institutionalized, the work reclaims sanctioned common spaces as places to explore “using private modes of communication to drive transient public displays of commentary.” Further, because the functional grammar of SMS employs a kind of truncated spelling, (e.g., “a sudn stream of flrty txt frm 1 I hrdly knw”) emphasize the demands placed on the viewer/ reader to “decode, to “decifr,” to make the seemingly illegible legible,” linking the writing style to the lyrical voice of poetic traditions generally. This means that the material effects of communicative technologies on language are emphasized and raise questions of the potentials for this kind of linguistic construction to bear affectively upon the viewer and upon public communication more generally.

Finally, Raley emphasized the situated or “locative” aspect of this kind of work where textual environments become more about transient display and process rather than the artifact. While documentation can convey the activity of the work, the interactivity and the ephemerality of even this kind of public SMS communication part of the archive of public memory. This talk has been published as part of an anthology, Comparative Textual Media: Transforming the Humanities in the Postprint Era, edited by N. Katherine Hayles (University of Minnesota Press, 2013).

Rita Raley is Associate Professor of English, with courtesy appointments in Film and Media Studies, Comparative Literature, and Global Studies. Her primary research interests lie at the intersection of digital media and humanist inquiry, with a particular emphasis on cultural critique, artistic practices, language, and textuality. She is the author of Tactical Media (Electronic Mediations)(University of Minnesota, 2009), co-editor of the Electronic Literature Collection, Volume 2 (2011), and has more recently published articles on interventionist media arts practices, digital poetics, and global English. She has had fellowship appointments at the National Humanities Center and UCLA, as part of the Mellon-funded project on the Digital Humanities, and has taught at Rice and the University of Minnesota. In Spring 2011 she held a short-term Fulbright appointment with “ELMCIP: Electronic Literature as a Model of Creativity and Innovation in Practice” at the University of Bergen, Norway; and in December 2011 she was a writer in residence hosted by the Dutch Foundation for Literature in Amsterdam. In 2012-2013 she was a visiting Associate Professor in English at NYU.